Before Welwyn Garden City was founded in 1920, Sherrardspark Wood was almost entirely situated in the civil and ecclesiastical Parish of Digswell centred upon Digswell House and St John's Church.

Its recorded history begins with a Domesday Book entry for Digswell in 1086. The fact that the wood is located on high ground with steep slopes and gravel and clay soils unsuitable for farming means that the 'woodland to support 100 pigs', interpreted to be about 150 acres, may well refer to the very location we know today.

There are many signs of pre-history. Fossils have been found deeply buried and signs of the passage of early man such as Stone Age artifacts and fragments of ancient pottery have been recorded, although no surface signs of any settlement within the woods have been found. Many ancient earth-bank boundaries, including the 3-feet-high parish boundary baulk between Digswell and Hatfield to the south, can still be easily traced today.

When the Manor of Digswell, including the wood, changed hands in 1599, a large and detailed map was prepared of the whole estate. It survives today and the outline of the woods is much as we know it, having hardly changed in some 400 years. The 3rd Earl Cowper added Digswell to the family estates in the 18th century and numerous maps and plans of the wood and references to woodland management appear in the substantial family archive now to be found in the Hertfordshire Records Office. It is from these that we gain a good picture of how the oak/hornbeam coppice wood was cared for over some 150 years. Reports of hunting and shooting (but not fishing) in and around the woods appeared in national newspapers.

With the 20th century came great change. The Cowper Earls died out and their local estates including Brocket Park, Tewin Water, Marden House and, of course, Digswell passed to Lord Desborough. In 1919 he sold off outlying parts of his land, and the main buyer was Ebenezer Howard's agent on behalf of the fledgling Welwyn Garden City. Well, this is the name by which we know the new town, but one of the many other names considered at the time was 'Sherrards Wood'. The early town plans clearly show an intent to build over much of the woodland but several 'Save the Woods' campaigns (including one in 1945 that attracted 5,000 signatures) and a change in approach to house building after the 2nd World War meant that the greater part of the wood was saved.

Sherrardspark Wood was thoroughly surveyed by the Nature Conservancy Council (a forerunner of Natural England) at the request of the Commission for the New Towns in 1981, when it was described as 'probably one of the best two or three oak/hornbeam woods in Britain'. Citation as a Site of Special Scientific Interest followed in 1986.

Please visit the Gallery to see more photographs relating to the history of Sherrardspark Wood.

Extent of the woods in 1897, with names of Handside Farm fields 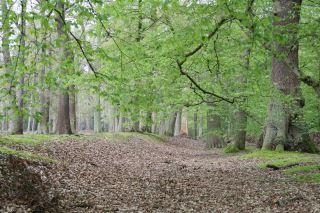 Among the mature oaks, a moss-covered wood bank over 400 years old