Some ash trees in Sherrardspark Wood have sadly developped this deadly disease. Linda Smith describes ash dieback and how it has spread into Hertfordshire.

Chalara dieback of ash is a disease caused by a fungus called Hymenoscyphus fraxineus which affects common or European ash Fraxinus excelsior.

Chalara causes leaf loss, crown dieback and bark lesions in affected trees. Once a tree is infected the disease is usually fatal, either directly or indirectly by weakening the tree to the point where it succumbs more readily to attacks by other pests or pathogens, especially Armillaria fungi, or honey fungus. Chalara was first identified in Poland in 1992 and has caused widespread damage to ash populations in continental Europe.

The fungus has two phases to its life-cycle. The asexual stage, which grows in affected trees, attacking the bark and girdling twigs and branches, was the first to be described and called Chalara fraxinea. The sexual reproductive stage, which was only discovered later, occurs as tiny fruiting bodies on infected rachises, or stalks, of the previous year's fallen leaves and is called Hymenoscyphus fraxineus. As a single fungus should have only one name, this is this one which has now been adopted.

Chalara was first confirmed in the UK in imported nursery stock in Buckinghamshire in February 2012 and in the wider natural environment in October 2012 in woodland sites in Norfolk and Suffolk. It has subsequently been found throughout Britain but mainly on the east side.

Owners of infected ash trees are not required to take any particular action unless served with a statutory notice by the plant health authorities.

As I write this, ash dieback has been found in Hertfordshire in Sherrardspark Wood in Welwyn Garden City and Ashridge and in naturally regenerated ash saplings Heartwood at Sandridge. Over 100,000 ash saplings were planted at Heartwood between 2009-12, but our monitoring this year did not come across any signs of ash dieback in the planted areas.

Government scientists have set out the most up-to-date understanding of the disease. Their assessment concluded that spores are produced from infected dead leaves during June to September. The spores are unlikely to survive for more than a few days, but spore dispersal on the wind is possible from mainland Europe. Trees need a high dose of spores to become infected. Wood products do not spread the disease if treated properly and there is a low probability of dispersal on clothing or by mammals and birds. The disease becomes obvious within months rather than years and once infected, trees cannot be cured. Not all trees die of the infection - some are likely to have genetic factors which give them tolerance of, or resistance to, the disease.

This article is based on information on the Forestry Commission website, http://www.forestry.gov.uk/chalara and Woodland Trust http://www.woodlandtrust.org.uk/visiting-woods/tree-diseases-and-pests/observatree/ where you can also find out how to get involved. Everyone is encouraged to look out for and report signs of ash dieback. 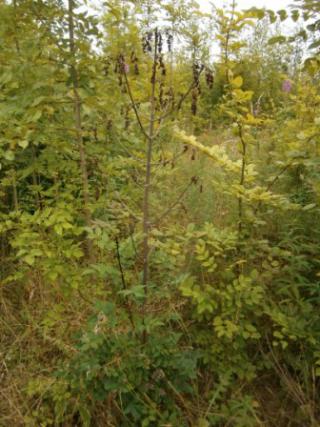 An infected ash in the natural regeneration area at Heartwood in July 2015, Photo Linda Smith