Nikki Edwards, geologist and Wood Warden, explains what sink holes (also known as swallow holes) are and why we have so many of them on our doorstep. Should we be worried about sinking without a trace?

Some of you may have wondered why there is an orange fence around the sink hole to the west of the railway track. This is because there is a possibility that there might be a large underground cavity that could cave in at any time.  For many years, water has drained into a hole on the west side of the pond, but it became wider in the summer of 2015 after days of heavy rain.  Chris James asked the wood wardens to put planking across the metre wide hole to prevent people falling down it and becoming trapped in the exposed clay.

Beneath the clays is a layer of unconsolidated sands and then is the chalk.  Chalk is mainly formed of the calcium carbonate shells of micro-organisms. The carbonate reacts with acid to form soluble calcium compounds and carbon dioxide, thereby wearing the rock away.  Rainwater is slightly acidic, and as it passes through the sands becomes more acidic. It travels through the chalk via fissures, and cavities are formed.  When a hole becomes large, the overlying material collapses into it – a sink hole is formed.

Sink hole and swallow hole are really the same thing, although swallow hole is usually used if water is seen to run into it. There are impressive examples to be seen south of Hatfield behind the Mayflower pub near South Mimms. The water disappearing into the swallow holes there takes several days to emerge at Chadwell Springs west of Ware! 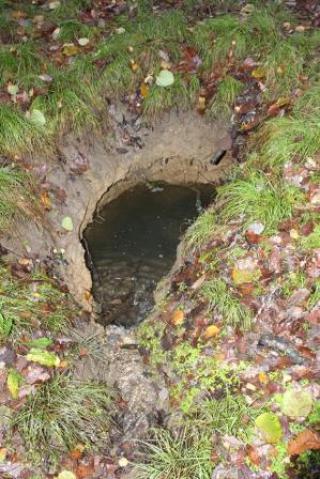