Finding and observing butterflies in the woods

Which butterflies would you expect to see in Sherrardspark Woods in summer?

At this time of year there are quite a few different species visiting or making a home in the wood, including one or two surprises.

One butterfly that you would be unlucky not to see is the Speckled Wood.  Medium-sized, mid to dark brown with cream, chequered markings, it is a true woodland dweller occupying almost every neighbourhood of the wood. It is seen flying in sunny patches between trees or settling on a leaf on a dappled lower branch.  I have seen rival males spiralling together in a shaft of sunlight in an otherwise rather dark patch of woodland.  Speckled Woods fly in spring and early to mid-summer, then late summer into autumn.

Bramble flowers and thistles are the main attractions for butterflies, drawing in species as much associated with meadows as with woodlands.  Sunny rides have an abundance of nectar opportunities, which is why woodland conservation is embracing path widening and strategic verge mowing to open up areas to the sunshine, encouraging diverse flowering plants.  Traditional coppicing work, where areas are felled on a rotational basis and then allowed to re-grow, results in the continuous appearance of clearings at different stages of re-growth all over the wood to the benefit of bio-diversity.  Some mature trees are left standing, however, to maintain high forest.

Meadow Browns and Ringlets can be seen bobbing in and out of the long grasses of the meadow on Templewood Vale and shortly afterwards they appear along rides in the wood.  At first glance they are difficult to tell apart as they are both brown butterflies but if you can focus for a moment you will glimpse a whitish fringe on the bottom of the lower wings of the Ringlet. If a Ringlet settles, a neat pattern of very small circles, or “rings” punctuate the brown of the wing. These rings are best seen from the underside when the wings are folded. Glimpses of orange distinguish the Meadow Brown when it is flying; when resting segments, or patches, of orange colour can be seen on top of the wings to varying degrees (on males, hardly at all). Underneath there is a tide mark effect of orangey colouring blending downwards to browns and beiges. The Gatekeeper is very similar, but smaller, with more orange visible on the upper side of forewings and hind wings.

Speckled Woods, Ringlets and Meadow Browns all lay their eggs on various grasses which their caterpillars then feed on. A good diversity of grasses is therefore crucial for the success of these species.  Red Admirals, Commas, Small Tortoiseshells and Peacocks lay their eggs on nettles, amongst other plants, and are happy in open country as well as woods and woodland margins.  Holly Blues (silvery under sides distinguish them from Common Blues) are small butterflies that fly in spring and then later on in summer (they have two broods). In spring the eggs are laid on the flowers of holly; in summer the host plant is a variety of different flowering shrubs but ivy flowers are the favourite.  Green-veined Whites lay their eggs on a variety of cruciferous plants, including Cuckoo Flower, Hedge Mustard, Garlic Mustard and Cresses. They can be distinguished from other Whites by dark veining prominent on the under sides of their wings.

With luck you could see the large, orangey coloured Silver-wash Fritillary gliding up and down rides, settling on the branches of trees or nectaring on brambles.  The caterpillar eats violets, which are abundant in places, notably in the area surrounding the “Shakespeare’s Dell” on the south side of the wood.  These colonies of violets help attract this woodland specialist.

If you are very, very lucky you might see a Purple Emperor, the caterpillar of which feeds on Goat Willow.  In fact, fortune smiled at us on the morning of 16 July 2016 when one of our butterfly monitors found a Purple Emperor sitting on a sunny patch of a path near Six Ways.  Only one sighting of this rare species has been recorded in Sherrardspark Wood in recent years as this notoriously difficult-to-spot butterfly lives high up in trees, feeding on honeydew.  It is the male that can be seen swooping from on high along woodland rides.

Effective woodland management, in particular coppicing, which allows light to reach the woodland floor, is instrumental in enabling different species of butterfly to find the right habitat in which they can live and breed. 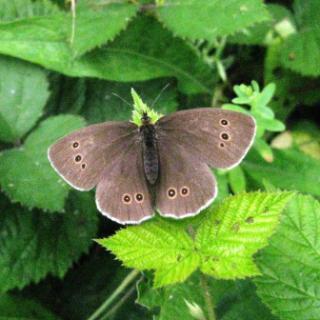