Celebrating 50 Years Caring for the Wood

To celebrate the Sherrardspark Wood Wardens Society's golden anniversary, members are holding an exhibition from 4 November to 3 December 2016 in the New Maynard Gallery in Welwyn Garden City's Campus West.

So how did the wood wardens come about?

From the outset, residents of Welwyn Garden City have felt protective of their special wood. As far back as 1929, within a decade of the founding of Welwyn Garden City, the local people were “up in arms” about plans to build over much of the existing woodland. A number of “Save the Woods” campaigns were launched and some earlier members of the wood wardens had played an active part in these campaigns during the 1930s and 40s.

Importantly, in 1966 the Wood Wardens Society was formally launched, with a simple constitution and rules: “To assist the Corporation a number of keen and interested local residents have voluntarily undertaken to act as wardens of the woods and they carry the Development Corporation’s authority to prevent abuse.” Their duties were six-fold.
To prevent:
People dropping litter
Damaging trees
Obstructing paths and rides
Exercising animals in a way to make it a nuisance to other people
The removal or destruction of any wild animals, birds or their eggs
And to prohibit the discharge of fire arms

In 1996 this “policing” role changed considerably as a result of a public outcry over the felling of many large trees by an outside contractor. The wood wardens offered to become more pro-active in the conservation work within the Wood and the (then district) Council accepted this offer. To begin, five or six people worked for two hours on a Sunday morning.

How times have changed!  We now have a trained work force of around 50 members turning out on Thursday and Sunday mornings, with usually 10 to 20 volunteers working to restore and maintain the historic nature of the Wood. Some members of the society assist in other ways, including monitoring and behind the scenes supporting roles.  There is always a huge amount of practical work that needs doing every year in order to re-establish the Wood’s historical character and to ensure it retains its Site of Special Scientific Interest status with all the vital protection that this gives. A large proportion of this work is undertaken by the wood wardens following the Welwyn Hatfield Borough Council’s 25-year Management Plan, agreed with Natural England and the Forestry Commission.

In addition to all this physical labour, the wood wardens undertake a vast amount of monitoring activities in order to document what is there now and to guide current and future management of the Wood. The wood wardens also promote awareness and interest in the Wood through public guided walks, working with schools, industry, local groups and others.

However, it’s not all work and no play! Not only is there the comradeship of the weekly working parties but also a monthly walking group, regular meetings with invited speakers, occasional outings, barbecues, picnics, visits to the pub and an annual Christmas lunch.

Sherrardspark Wood is a very special and important local amenity. Come along to The New Maynard Gallery during November to see for yourself. You will find out more about:
What the wood wardens do
Why they do it
How much more there is to the Wood than trees
Why it is an area of special interest for children 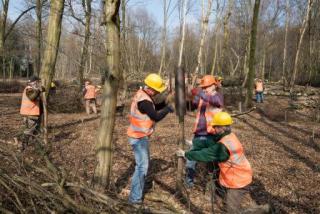