One Sunday morning at the end of November 2016, Sherrardspark Wood Wardens joined local volunteers from the parish of Ayot St Peter to help them in their constant battle with nature to preserve an ancient decommissioned graveyard.  This struggle to prevent ivy, nettles, bramble, grasses, elder and hawthorn from enveloping everything is a familiar one, but one of the beauties of traditional churchyards is the way in which, with a bit of maintenance, they can showcase the natural world: the romantic ruin of gravestones and larger tombs and their adornments, embedded brokenly and lopsidedly in their own “God’s acre” (more or less) of green space.

Headstones for graves as early as the 18th century survive in the old churchyard and serve to remind us that there have been three churches in this location. A medieval church was demolished in 1750 to make way for a newer building of a rather unusual octagonal style with a separate bell tower. A hundred or so years later in 1861 it was in turn pulled down and a more conventional Victorian church was built in its place, but in 1874 it was struck by lightning and for the most part burned out. The local landowner Earl Cowper of Panshanger thereupon donated a new site nearer the centre of the village, and the present church, with interior reflecting the new 'Arts and Crafts' fashion, was dedicated in 1875. The remains of the third church on the old site were used as a mortuary chapel and burials were still made in the old churchyard in the 20th century. The chapel steadily fell out of use and was demolished in 1954. Today, the chest tomb and other headstones seen at the left of the mortuary chapel in the 1909 postcard can still be seen in the churchyard.

Increasingly graveyards are being recognised as places where the countryside is present, not as a neglected impenetrable brambly jungle, nor as a highly maintained garden where weeds simply are not allowed, but, like a small park in a built-up area, as a sanctuary allowing the visitor stumbling across it to stop a moment and appreciate the tranquillity of the site.

Such plots are havens for wild plants and animals, often in the middle of less hospitable urban or agricultural environments.  The objective, therefore, of the work party was to remove the overgrown foliage where it threatened to destroy, as in the case of ivy overloading and toppling walls and fences or bramble roots infiltrating and engulfing monuments.

Trees damage and destroy too: branches from a chestnut were slowly dislodging a perimeter wall of local flint. With the aid of loppers, brush cutters and a chainsaw the landscape of the plot was rediscovered by thinning and pruning back overcrowding trees and shrubs (the graveyard has become a wood) revealing a semi-natural perspective of stone monuments and guardian yew trees with vistas of the fields beyond.

The “weeds” (ivy, bramble and grass) were strimmed to define pathways, inviting the eye and the feet to wander, and helping the daffodils and snowdrops that populate the graveyard to emerge and flower in the spring.  Elsewhere the creepers and spreaders were left to carpet the ground or form shrubberies (and valuable habitat for animals: birds, mammals, butterflies, beetles, bugs, frogs and maybe even slow worms and native snakes).

Best conservation practice recommends cutting different areas of scrub each year so that it is kept in check and other species can colonise the cut areas in the meantime. Some bigger bits of wood were spared from the bonfire and piled up and left as insect “hotels”.

Should you find yourself visiting the old churchyard at Ayot St Peter, remember that what you are seeing is not only the hand of God at work but the hand of man as well. 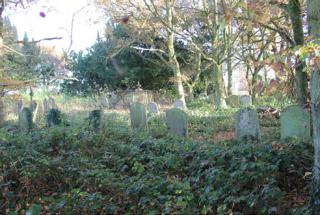 View of the south-west corner: before. Photo Bev Curtis 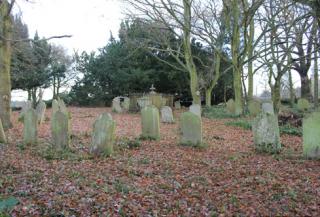 View of the south-west corner: after. Photo Bev Curtis

View from inside the gate: before. Photo Bev Curtis

View from inside the gate: after. Photo Bev Curtis

View to the south: before. Photo Bev Curtis

View to the south: after. Photo Bev Curtis